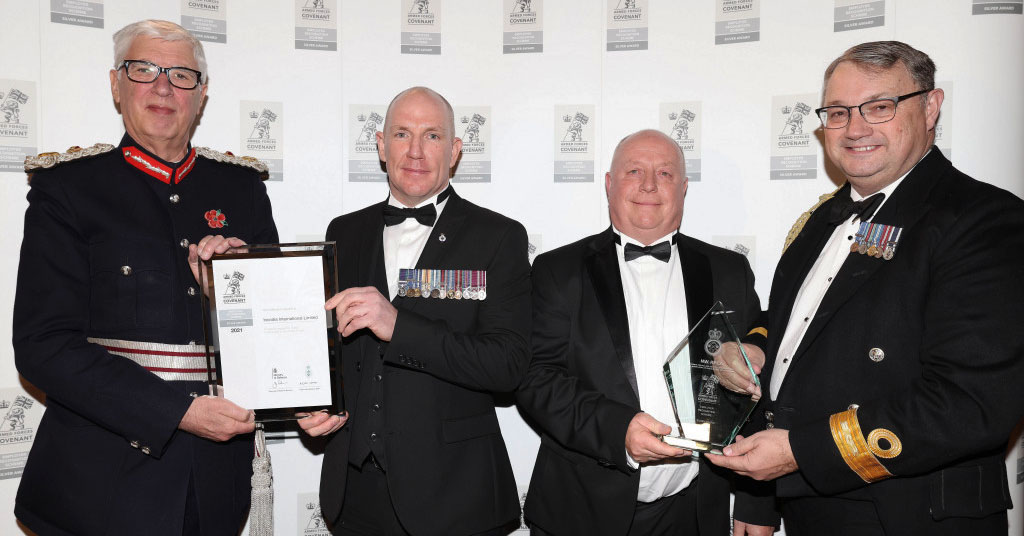 Incodia received the scheme’s Bronze Award in 2020 and have since made achieving the Silver Award a key aim of their corporate governance.

The Silver Award now recognises that Incodia not only promote forces-friendly recruitment policies but actively employ former service personnel within their team.

“We’re delighted to have achieved the Silver Award as one of the ways we can increase diversity and promote equality. Particularly within manufacturing, the skills which myself and others gained in the armed forces are especially relevant and valuable” says Incodia’s Chief Executive, and former member of the Royal Navy, Allan Lock.

The government’s Defence Employer Recognition Scheme encourages employers to embrace the defence community and inspire others to do the same.

The scheme rewards employers that pledge and demonstrate support to the armed forces community and align their values with the Armed Forces Covenant.

The achievement of both the Bronze and Silver awards has been spearheaded by Paul Howarth, Incodia’s Logistics Manager and a former soldier himself.

“The Silver Award is great recognition for the policies we’ve long promoted. We know it isn’t always easy to make the transition from military to civilian life, despite the great skills which service personnel gain. I was once given that opportunity and I’m delighted we can demonstrate it’s there for others too” says Paul.

In addition to the requirements of the Bronze Award, the Silver Award requires Incodia to demonstrate active employment of ex-service personnel, policies to support the mobilisation of reservists and the active promotion of armed forces-friendly practises.

Based in Essex and Lancashire, the 140-strong Incodia team includes former service personnel from all branches of British armed forces.

“As the largest supplier of cards in the UK, we feel we should lead by example. The Armed Forces Covenant is an example of our commitment to the community, whilst our FSC, ISO and other accreditations help demonstrate how seriously we take environmental sustainability” states Allan Lock.

With gift, loyalty and membership cards typically made from PVC plastic, Incodia launched a range using more environmentally friendly materials in 2017 called Earth Cards. They have subsequently helped over 170 brands and retailers to swap their gift cards to more sustainable materials including paperboard.

Each year, Incodia supply over 250 million cards either direct or through commercial partners to leading brands like Tesco, Costa and the National Trust.

From their dedicated facilities in Lancashire, they also send millions of personalised loyalty and membership cards direct to consumers across the UK.

Incodia is currently one of just 25 medium size commercial businesses (50-249 employees) in East Anglia to achieve the Silver Award.